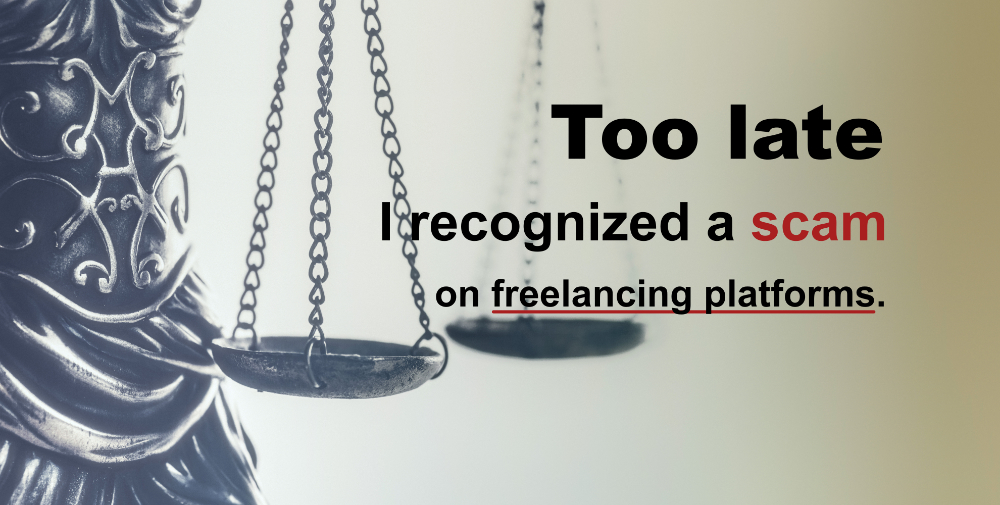 I was successfully scammed this month. Although I tend to be good at losing my invested effort, this was easily the hardest money I ever lost. What I retain is the change in my methodology that I effected in the effort to implement these two fictitious freelance projects, one of which successfully made off with my funds.

It started with my return to two freelancing job websites, Guru and Upwork. I do not fault these companies for my misfortune, as they prominently and repeatedly have warned users against communicating with potential clients outside of the platforms. Shortly after reactivating my accounts on either website and updating my profile photo, biography, and portfolio, I was contacted for job offers to which I had applied.

I ended up discussing contracts with two parties concurrently. One of them, replying to my Upwork application, had offered me a long-term data entry contract for a property management company from Texas. This was the scam that successfully manipulated me into giving them a substantial amount of money. The other scam, which reached me through Guru, claimed to be offering me a contract to edit medical documents for the Serbian pharmaceutical company AbelaPharm. Both of the companies are quite real and legitimate. While the postings on Upwork and Guru had been fairly imprecise, the detail in the scripted interactions and materials subsequently presented to me was enough to fool me. The contact who had ostensibly reached me through Upwork told me that the Upwork listing was being temporarily closed in order to prevent too many applicants but that we would soon proceed on Upwork again, where I was to be paid through the normal Upwork payment processing. At this early point, I might have known what to ask in order to reveal the scam had I had any past familiarity with processing payments through Upwork, but this was my first time ever to receive a response to an application.

Both scammers interviewed me extensively before telling me that I had been selected for the contract positions. I hadn’t believed that there had been any substantial competition; after all, there hadn’t been all that many bids reported on Upwork and Guru. Thinking that they were proceeding with the interviews to apply pressure on me as a bargaining tactic and also that they were vetting for basic quality, I proceeded with the text chat interview processes. Now I see that my assumptions were pretty close to the truth. They were counting on my psychological response to the challenge as a way to manipulate me into continuing to buy in to their narratives. They also wanted to make sure I was the kind of gullible person worth the risk and time of scamming. As they told me, I passed the interviews. I was exactly the kind of person they were looking for.

Although both situations involved the same kind of scam and the processes were very similar, differences in technique, communication style, and the rhythm of their responses have lead me to conclude that the two parties were separate entities. In both situation, the initial message through the freelancing website contained a link to a PDF document providing instructions for contacting people, ostensibly with the HR departments of these websites. In both cases, the initial contact was through Skype. The one that successfully scammed me continued using Skype throughout the entire process, while the one for the medical document editing gig moved to Google Hangouts. In both cases, I received contract documents through email, which I signed and returned. Had I been paying proper attention, the scam would have been revealed to me through the fact that the email address was spoofed to appear to be coming from the website of the property management company. When I viewed the full header of this email in Microsoft Office, this mistake was clearly visible, as the “X-SECURESERVER-ACCT” value explicitly indicated another, much more suspicious email address. 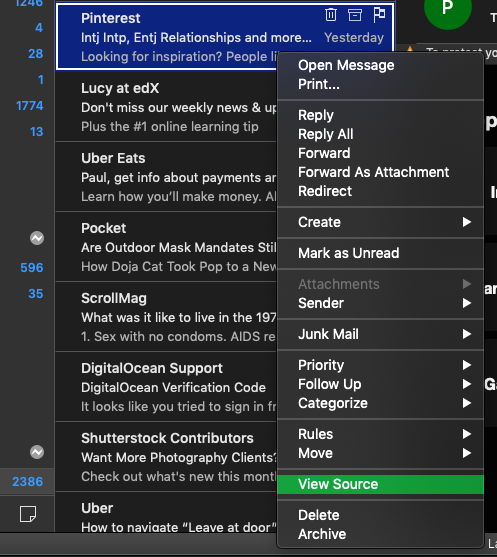 The email concerning the medical document gig was much harder to identify as illegitimate. It was not merely spoofed but was a straightforward email address at the domain //abelapharm.net//. Again, however, paying adequate attention would have revealed the scam at this stage too. For one thing, had I attempted to view //abelapharm.net// in my web browser, I would have seen a blank domain parking page from the Lithuanian web hosting company Hostinger. I had searched the web to correlate the existence and legitimacy of this Serbian pharmaceutical company AbelaPharm, but its canonical website is at //abelapharm.rs//. I have no excuse for noticing the discrepancy in the top level domains, especially considering that the contract document I received in the email from //abelapharm.net// had a prominent link to //abelapharm.rs//.

The trick was to make me buy in psychologically so that I would persist through the unsafe and unreasonable requests that the scammers were yet to make. After having signed the documents, both parties took steps to verify my commitment, making sure that I was promising to go forward with a long term working relationship.

I somewhat stuck up for myself during this process, asserting especially to the phony AbelaPharm representative that I had other commitments and that I needed to monitor the amount of time required for the part time medical document editing project closely. This caused the interviewer to state that his company had to re-evaluate my candidacy. They must have decided that my sincerity made me an appropriate target despite my concern for my workload, but at every point in that conversation, whenever I exhibited any hesitancy in my willingness to commit wholeheartedly to the team or raised too many questions about the technical details regarding my employment and training schedule, the person on the other side of the Google Hangouts chat would pause for a notably long time before replying.

The scammer pretending to be from the Texas company had a head start compared to the scammer claiming to be from Serbia. The Texas scammer convinced me to deposit a fraudulent check into my personal bank account in order to pay for a company laptop that was to have been preset with all the appropriate data entry and tracking software. Having a dedicated company laptop sure sounded like a better proposition than installing various tracking spyware on my own computer. I had asked if they were going to send it in the mail, but the scammer wanted me to purchase it from a supposed special vendor. Upon inquiring further, I was told that the company had further contracted with a drop shipper who would deliver it to my door, but that I had to buy it myself before it could be delivered.

Both the Texas scammer and the Serbia scammer required that I use the bank’s mobile app to deposit fraudulent checks. Both told me to print a check that was emailed to me and to use my mobile phone to complete a mobile deposit. The Texas scammer definitively steered me away from going to my bank in person to make the deposit without seeming to put her foot down too explicitly.

She told to use the deposited funds to buy American Express prepaid gift cards to cover the amount of the laptop, which I was then to submit back to my contact by photographing them so that she could arrange the purchase and coordinate the delivery. This highly suspicious request was not the Texas scammer’s preferred method; there was an app called Zelle that she had initially wanted me to link to my bank account in order to facilitate the monetary transfer.

She was a good conversationalist and actor. She talked me through reasons why alternatives including Venmo wouldn’t work. Her skill in easygoing but persistently hurried communication as well as my commitment weighing on my mind caused me to trust her with the details. I did as she asked, traveling around my city to find the requested American Express cards, which I purchased with my debit card using the fraudulent funds that were temporarily available in my checking account. Throughout the process, she thanked me many times for my persistence.

I had been invigorated by the complicated task of procuring the prepaid cards. There had been several problems that I had to solve in order to get them as fast as possible, and my effort reinforced my commitment. After fully complying with the scam to the point of transmitting the prepaid cards, I felt the cognitive dissonance that I had been repressing. I had previously mentioned to the Texas scammer that my bank might be suspicious of the check until it clears, and I began to realize that the check would probably never clear.

My suspicions became overbearing for me when, having already taken the money, the scammer attempted to recruit me. I think she felt bad for me, because of my sincerity and persistence, and because I had mentioned that I didn’t have enough money in my bank account to cover the full price of the laptop. She asked me if I would be interested in coordinating similar deliveries for other clients in the near future. After a delay, she said that she had spoken with “the boss” about my potential involvement and that I would receive a bonus if I were to agree to assist. I declined, reminding her that she had said I would be paid through Upwork. She replied with a hasty “Sure” and then made an excuse about “logistical delays” when I asked when the laptop would be delivered. I said that I no longer believed in our association. I thanked her for the adventure and ended our Skype conversation with, “at least now I know how to recognize a scam.” She blocked me.

The long conversation with the Serbia scammer was going on at the same time. He was just getting to the part where he was asking me to use my mobile app to deposit his check after explaining that I was supposed to buy a special MacBook Pro with it. I stopped replying to him on Google Hangouts and have ignored all subsequent contact attempts on Google Hangouts and on Skype. Prior to these disconcerting experiences, I had put in significant effort into organizing my space, equipment, and process in the hopes of being able to make a sustainable income freelancing. I was still coming off the high of all the organizational effort that I had invested, as well as the motivational energy from having just been working enthusiastically on something that turned out to be a shameful failure. I let the momentum carry me through the next steps:

The main purpose of this post is an exercise in asserting my own narrative, so that in the future I will be better at resisting the narratives that people want me to buy into. I believe that the practice of confession has the power to effect tremendous progress for both individuals and for communities.

I had known better, but I foolishly avoided the proper exercise of all the available knowledge that would have prevented my loss. Instead of utilizing knowledge and caution, I relied on reckless self-assurance.

That’s the first and truest scam.